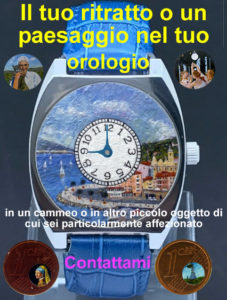 THE SMALLEST PAINTINGS IN THE WORLD

They spoke or wrote about him

MAURIZIO COSTANZO in his TV programme said: ‘Believe me, it’s a foolish matter, indeed. I’ve never seen something like that. Let’s realise that it isn’t normal to paint on those surfaces, then, besides … he has a taste for details’.

VITTORIO SGARBI well known critic of art, during a TV programme of his ‘Sgarbi quotidiani’ speaking about the artist said: ‘Believe me, Busonero is a Champion! He’s virtuous to such a point that only Sgarbi’s short-sighted eye could recognise in this pink spot a painting by Renoir and in the eye of this very very small tailoress’needle where ‘no camel wolud pass’, a marine’:

Even RAI UNO (Italian state TV) during some programmes presented the works by Busonero.

The same did RAI DUE during a morning programme named ‘MATTINA IN FAMIGLIA’ in which several very small miniatures were presented apart from a portrait of Oliver Hardy painted inside the hollow of a very small syringe needle on a surface of 0.049 mmq.

MONTECARLO TV NETWORK interviewed him twice during TV Newsreel and in a broadcasting led by Marco Balestri.

GUINNESS BOOK OF RECORDS – Italian Edition 1996 page 186 – Stefano Busonero has painted on the edge of a Telephone card a portrait, the dimension of which are 0.30 x 0.35 millimeters representing Saint Padre Pio (Father Pius), an italian saint monk of our time.

The daily paper L’UNITA’ wrote: ‘Using a powerful microscope and a very steady hand, Busonero paints on canvas smaller than a tenth of square millimetre. He only meets a difficulty: he doesn’t know how to sign his works.

The most sold Rome’s newspaper, THE MESSAGGERO wrote: The Argentario born artist, his fellow-citizens call ‘Findiferro’ (Iron-wire) paints on the needle points microscopic paintings which can only be seen by means of a stereoscope’.

The LA SETTIMANA ENIGMISTICA, a weekly magazine of crosswords, rebus, amusements and culture, inserted a work of his in the survey ‘STRANO MA VERO!’ (Strange but true).

His works have been taken into consideration by journalists in the pages of several national newspapers, among which, LA NAZIONE and IL TIRRENO paid a particular attention to his techniques.